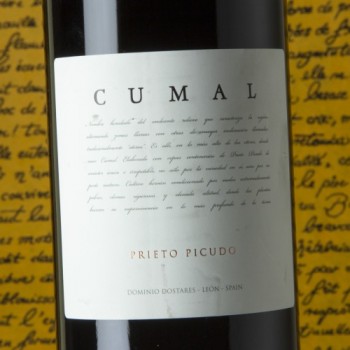 Fermented with indigenous yeasts. Aged for 12 months in French oak barrels with an extra 12 months in the bottle.

Dominio de Tares Cumal, is a red wine made from Prieto Picudo by the Dominio de Tares winery of Castilla y León in Spain.
This variety is indigenous to the province of León and the grapes come from old vines almost a hundred years old located at an altitude of 850 metres above sea level.


The grapes are harvested purely by hand, making a strict selection of the best bunches of grapes at their optimum ripeness and then transported to the winery in 15 kilogramme boxes. On arrival at the winery, a new selection is made on the table. Afterwards, the grapes are destemmed and macerated for 15 days.
In the winery, the alcoholic fermentation process is carried out under controlled temperature with a maximum of 28°C for approximately 28 days. The maceration is carried out with 3 pumping-overs per day for 15 days in stainless steel tanks.
Malolactic fermentation takes place in barrels and ageing takes place for 9 to 12 months in used French and American 225-litre oak barrels. Once the ageing process is completed, Dominio de Tares Cumal is aged for a further 12 months in the bottle before its release to the market.


Dominio de Tares Cumal is a wine with fruity and floral aromas. In the mouth it is ample and polished, with sustained acidity, structured but friendly, ample, very persistent and with an elegant aftertaste.


Dominio de Tares Cumal is a great wine from Castilla y León made from a practically unknown variety, on the verge of extinction at the end of the 20th century.
This wine is made from centenary vines that place this variety among the highest standards of delicacy and finesse.
In the gastronomic field, Dominio de Tares Cumal is the perfect accompaniment to dishes with baked meats, stews, botillo or cheeses.
And you, have you already tried this magnificent wine of the Dominio de Tares winery?