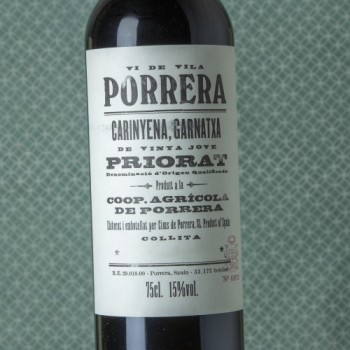 Cims de Porrera Vi de Vila is a red wine made from the Grenache and Carignan grape varieties, which are harvested from the youngest vines that have also been planted in different soils in order to provide the grapes with different organoleptic properties.
Like the Vi de Vila Blanc variety, this product, made at the Cims de Porrera winery, is produced entirely in the D. O. Ca. Priorat, in Catalonia, thanks to the efforts of the farming community of Porrera.


The process begins with the manual harvest, where the best fruits of the vine are collected, to later proceed to the extraction of the wine. One of its main characteristics is that, during this process, the red wine undergoes a period of ageing in foudre, concrete and barrels, culminating in a period in the bottle that lasts approximately three years.
Due to its characteristics, it is recommended to decant it, as this way its organoleptic properties will develop better, which in turn translates into a much more pleasant consumption.


On the nose, its aroma is spicy, with mineral and fresh notes, which stand out for their intensity. On the palate, its flavour is pleasant and with a velvety, lingering finish. The finish is long and elegant, with a slight hint of red fruits and spices.


The best of Priorat

Other vintages: 2018
Other sizes: Magnum